Wrocław: city of bridges and dwarves

Any newcomer, who visits Wrocław for the first time, clashes with its German character present in many places. There is nothing strange about it - the city, situated on the Oder, has passed from hand to hand for over a thousand years of its history. It was ruled by Poles, Czechs and Germans. And it was the latter that had a huge impact on how Wrocław looks today, because from the mid-18th century until the end of World War II, it remained in the sphere of German influence.

Today, Wrocław is one of the most beautiful, interesting and fast-growing Polish cities. However, shortly after World War II, its future did not seem rosy. It was turned into a fortress city in 1944 and suffered a lot during the fighting in the first half of 1945. It is estimated that about 65 percent of the urban tissue was destroyed and more than 100 000 people lost their lives.

After the liberation, looters prowled the city, and the Soviet troops on the way home not only stole the most valuable things, but also set fire to and blew up entire districts. Flooding Polish residents - the vast majority of them were repatriates from the east - did not feel any bond with the city, and no one was sure whether the city would remain Polish or whether it would become German again as a result of the post-war establishment of borders. Orphaned and stripped of all that is valuable, Wrocław quickly gained the name of "the capital of the Polish Wild West".

71 years after the end of World War II Wrocław celebrated its revival as the European Capital of Culture. Of the turmoil of war and what followed immediately, only a memory remained. The city has been rebuilt on every level - architectural, historic, cultural, social and economic. It has become the most important point on the map of Lower Silesia, attracting companies, investments and - thanks to excellent universities - crowds of young people.

Wroclaw today is a thoroughly European city that has a lot to offer to tourists. Called "the Polish Venice" it captivates tourists with over a hundred bridges and footbridges, numerous rivers, canals and islands. Its multiculturalism and complicated history can be seen at every step in architecture - Gothic, Renaissance, Baroque, Art Nouveau, Modernism, the national style of the Third Reich, socialist realism and postmodernism coexist peacefully, though not always stylishly. The rich cultural offer attracts not only residents, but also people from all over  Poland and abroad. Wrocław is a city friendly to all newcomers, regardless of their motivations. 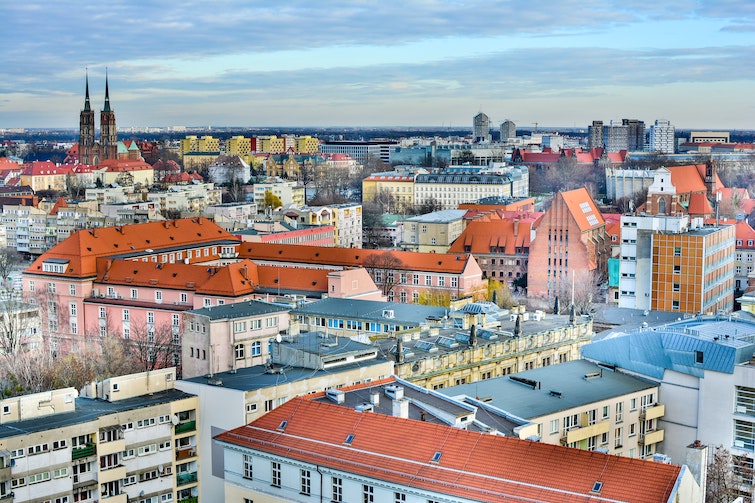 How to get to Wrocław?

As one of the largest Polish cities, Wrocław is perfectly connected with the rest of Poland and neighboring countries. The airport handles domestic and international flights, and the trains of local, national and international carriers stop at the Wrocław Główny station.

The city is also favored by a good network of express roads - the A4 motorway, which is part of the European E40 route, crossing the south of Poland from west to east, the S8 expressway, thanks to which the travel time to the capital has been shortened to about 3.5 hours, the S5 connecting Wrocław with Poznań and finally the S3 running from Lower Silesia to Western Pomerania are all within 10-20 minutes drive

So there are many ways to get to the city, but if you plan on seeing more than the city center, it's best to rent a car. Our nearest branch is in Cracow - the journey from Lesser Poland to Lower Silesia will take just over 3 hours using the A4 motorway.

A must-see spot on the map of all tours. The Wrocław Market Square is one of the largest medieval markets in Europe. Its boundaries were marked out in the 13th century - along with the adjacent Pl. Solny (Salt Plaza) and Nowy Targ it was the main place for trading.

There are as many as 11 streets leading to the Market Square, and the square itself has nearly 40,000 sqm. In the middle of it you will find the gothic Old Town Hall, which today houses a museum; in turn, the city authorities are based in the New Town Hall.

The founders of the colorful tenement houses surrounding the square were wealthy Wrocław townspeople - thanks to them, Kamienica pod Gryfami or Kamienica pod Elektorami were built among others. In their cellars and on the ground floors you will encounter famous Wrocław pubs and restaurants, including one of the oldest in Poland, namely Piwnica Świdnicka founded in 1273. 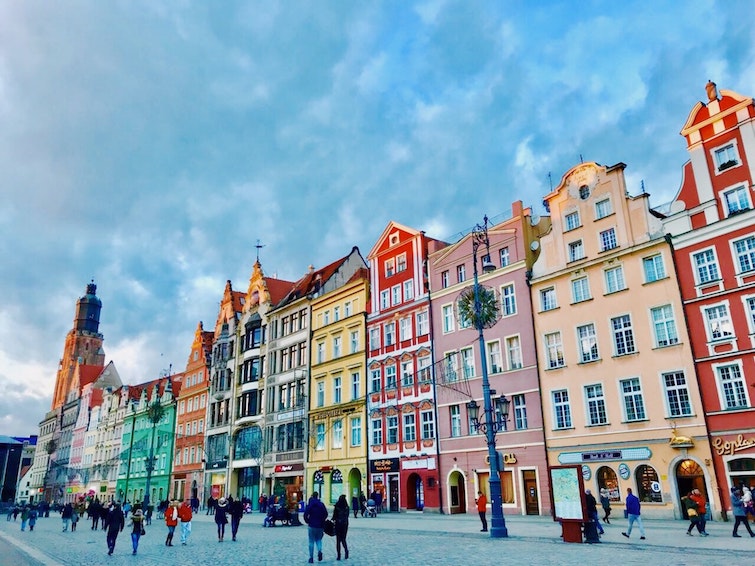 Ostrów Tumski is one of the oldest parts of Wrocław - it is here that you will find the most beautiful religious buildings of the city: the 13th-century Gothic cathedral of John the Baptist, the Church of St. Cross or the Church of St. Martin. There is also a beautiful botanical garden of the University of Wrocław, where many specimens of flora from around the world have been collected.

Until the nineteenth century, this area was an island, but after filling one of the arms of the Odra River, it became part of the mainland. Also, until the 19th century, Ostrów Tumski was purely religious in character. Today, the sacred is intertwined with the profane, but time still flows a bit slower here than in other parts of the city, and the gas lanterns are lit by a lighter. 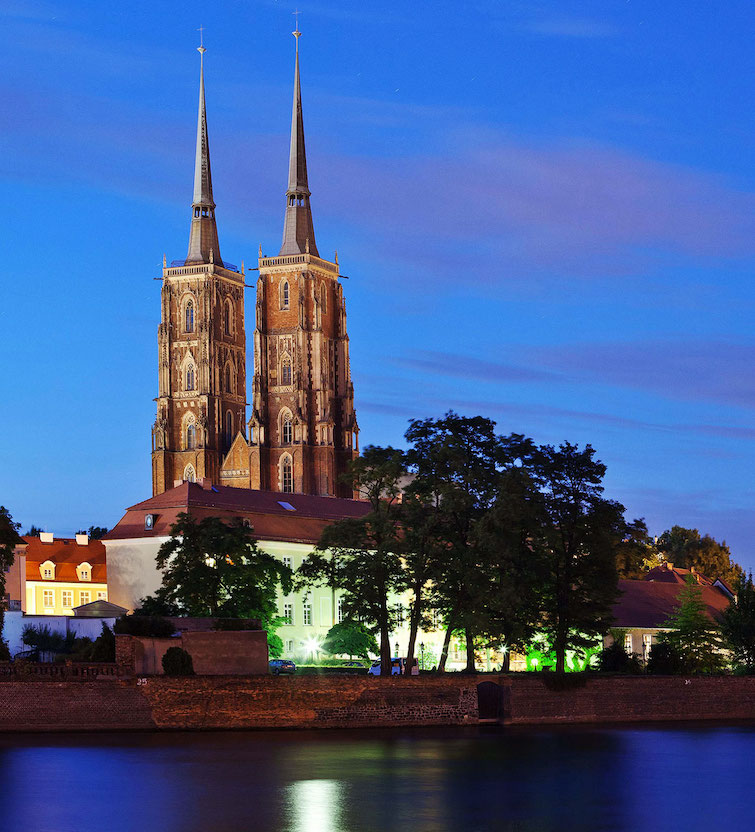 In a city with over 130 bridges, choosing the few most beautiful and interesting ones is extremely difficult. Nevertheless, in our list, we will mention the three most characteristic ones.

The Tumski Bridge connects Ostrów Tumski described above with the Sand Island and is undoubtedly the favorite place of all lovers - it is here that they leave padlocks as a sign of their eternal love for each other. As it connected the secular part of the city with the church part, there are statues of St. John the Baptist and St. Jadwiga. The current steel bridge was built in 1889, previously there were drawbridges here.

The characteristic red balustrades can be found on the Sand Bridge. It is the oldest iron bridge in Wrocław, opened in 1861. The Piaskowy Bridge connects the northern and central parts of the city. Its name comes from the Sand Island. 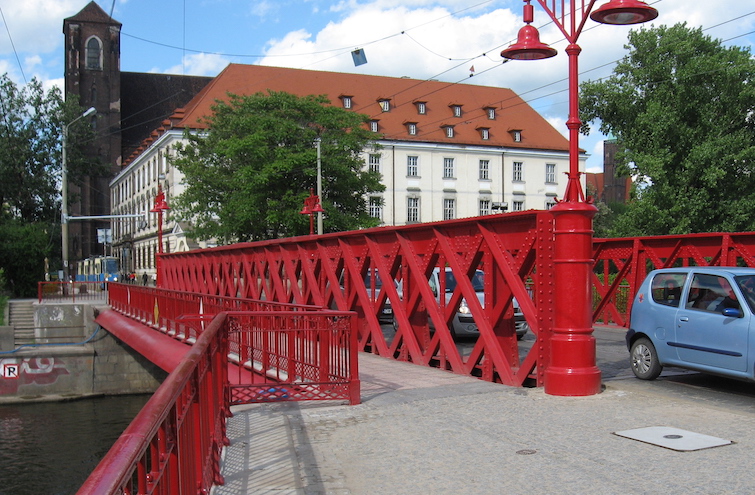 The last bridge that must be mentioned is the Grunwaldzki Bridge. Built at the beginning of the 20th century from Strzegom granite and Karkonosze granite, it changed its name very often - initially it was the Imperial Bridge, then the Liberty Bridge, and finally it became the Grunwald Bridge for longer. At the time of construction, it was one of the most modern crossings, using the technology of steel tapes supporting the span. Today, after numerous renovations, the Grunwaldzki Bridge has regained its former glory. 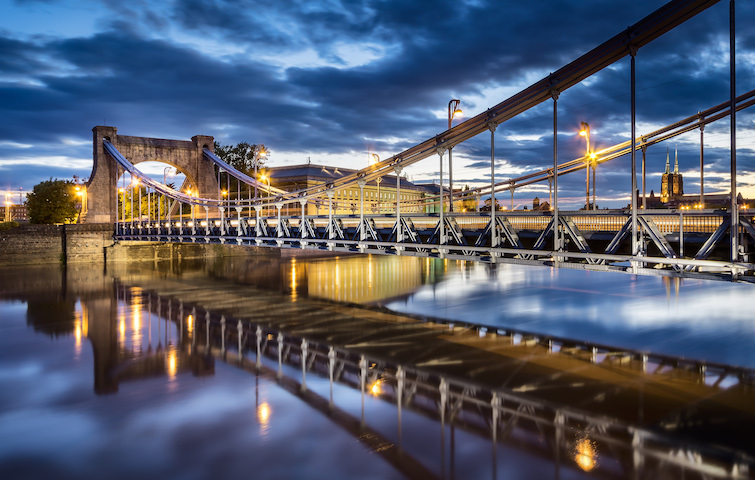 Among all the buildings in Wrocław, the spectacular and sports the Centennial Hall is one of the most characteristic and evoking extreme emotions. For some, a beautiful emanation of Wrocław's modernism (the author of the text belongs to this group), for others, a concrete monster reminiscent of the city's German past.

The Centennial Hall was built in the years 1911-1913 according to the plans of Max Berg. It commemorated the 100th anniversary of Emperor Frederick William III calling upon the Prussian people his proclamation “To My People" and the subsequent victory over Napoleon's army at Leipzig. It was intended to be an exhibition facility where Centennial Exhibition was to be located.

What distinguishes the Centennial Hall from other buildings of this type is the use of reinforced concrete on an unprecedented scale. Max Berg designed it with functionality in mind rather than appearance and yet it is beautiful (at least to some eyes). Thanks to this, a unique and original building was created, which in 2006 was entered on the UNESCO world heritage list.

The exhibition concept is completed by the Four Domes Pavilion, Pergola and Japanese Garden, which you can read more about below. 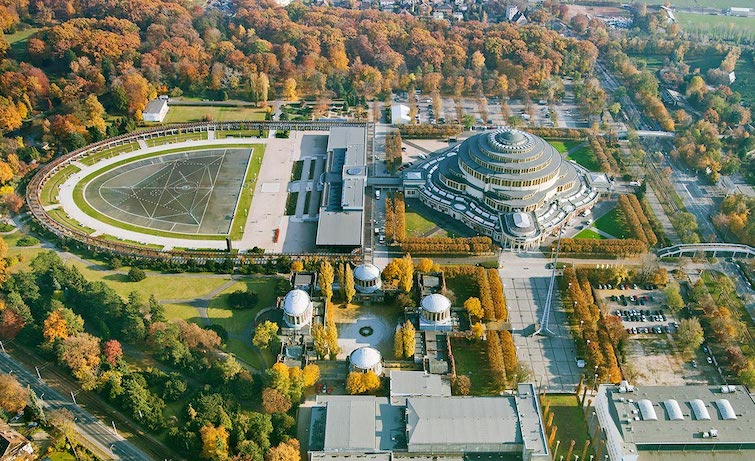 The Japanese Garden in Szczytnicki Park

The Wrocław Japanese Garden is, according to many, the most beautiful part of Szczytnicki Park. Arranged by masters from the Far East, it was the only exotic part of the Horticultural Exhibition in 1913.

In the years 1995-1997 the garden was renovated based on the design of prof. Ikui Nishikawa; unfortunately, just two months after opening, during the flood of the century, it went underwater for three weeks. This made another renovation necessary.

Today, the Japanese Garden is one of many people's favourite places for walks and photo wedding photo shoots. The richness of the Far Eastern vegetation and the unique atmosphere of this place leads to unhurried contemplation. 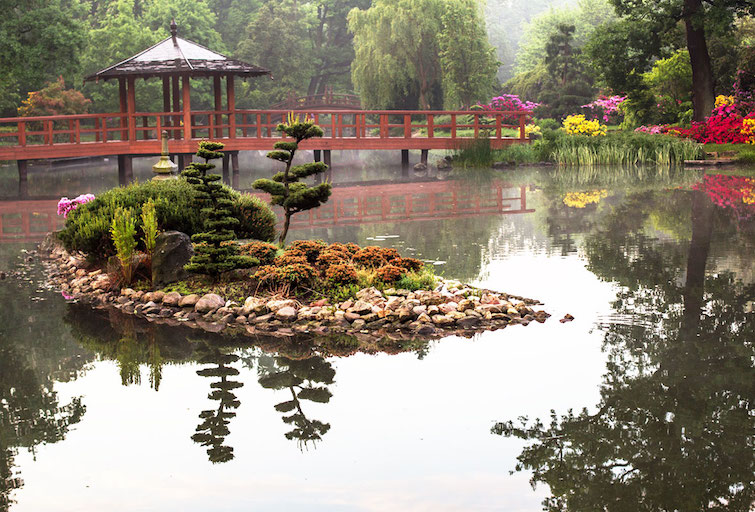 Our text about Wrocław would be incomplete if we did not mention the local dwarfs, which you will meet in various - sometimes very surprising - places in the city.

Legend has it that the dwarfs have their Underground World in Wrocław, and in there their kingdom lies. One can enter it through a mouse hole. However, no one knows which mouse hole it is. Since the inhabitants of Wrocław cannot visit the dwarfs in their country, they invite them to their world during the Dwarfs Festival in September. The gnomes celebrate their friendship with people then.

There are many theories of where the dwarfs came from and we don't want to bore you, so instead of quoting them, we will simply invite you to carefully observe the streets of Wrocław in search of the smallest inhabitants of the city. 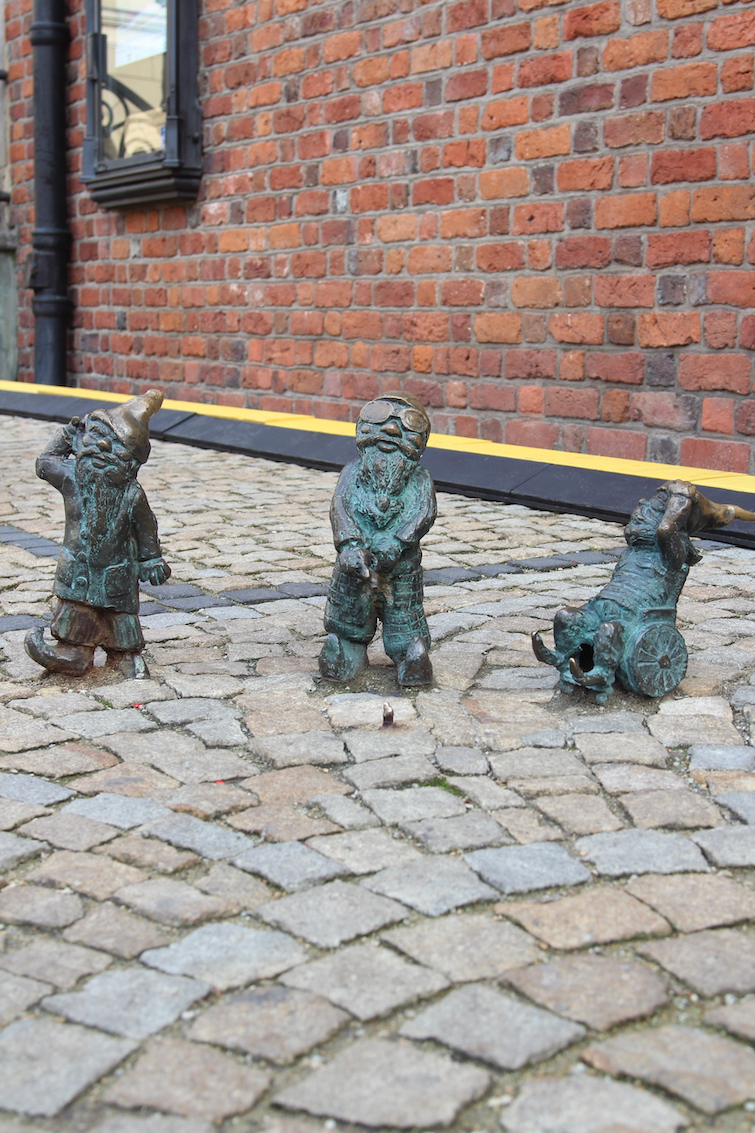