Romantic places and corners, walks and experiences - all this is also on offer in Prague. 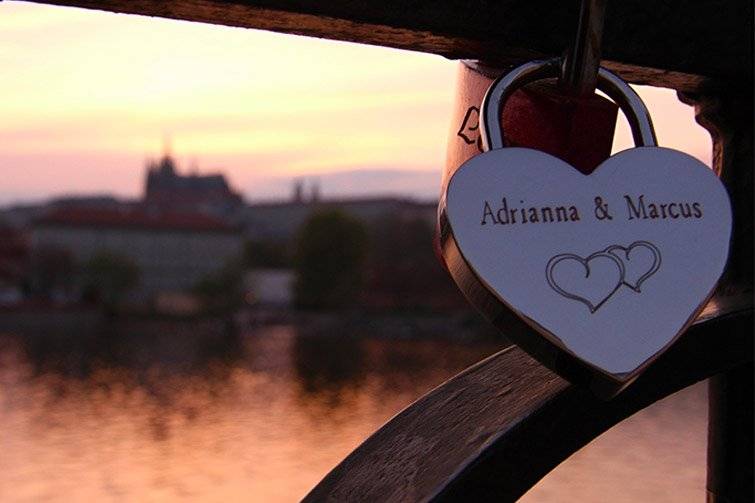 Prague Castle, the former seat of Czech kings and the largest castle complex in the world, is without doubt one of the most significant monuments both in Prague and the Czech Republic. It’s a place that offers magnificent views, architectural wonders and in the evening, small lamp-lit streets. For a romantic stroll, we recommend St. Vitus Cathedral, the Golden Lane and the Old Castle Steps. The hidden streets of the New World (Nový Svět), lined with colourful houses and intimate corners, are located in the valley below Loreta near Prague Castle. You can stop at the stylish Romantik Hotel U Raka and sit by an open fireplace.

This part of Prague was simply made for romance in any season. The panorama of Prague that opens in front of you from Strahov Monastery offers you a new angle on the city - and you avoid the crowds at the scenic overlooks at Prague Castle. From Strahov Monastery, it's a short walk to the top of Petřín, one of the highest spots in Prague. In Nebozízek Park, which leads from Petřín to the Lesser Town, is a statue of Karel Hynek Mácha, a famous Czech Romantic poet. Kampa Island in the Lesser Town is certainly one of the most charming spots in Prague. Its central area is an extensive park overlooking the Smetana Embankment, Charles Bridge and the National Theatre, and you’ll also find the oldest bridge over Čertovka, a branch of the Vltava separating Kampa Island from the mainland. It's on this bridge at the Grand Priory Mill (Velkopřevorský mlýn) where enamoured couples can hang a padlock as a symbol of their eternal love, whose key they then toss into the water below.

From Kampa it’s a short stroll to Charles Bridge, the oldest bridge in Prague, whose charm can be best appreciated in the morning fog or lit at night by lamps. If you enter from the direction of the Lesser Town Bridge Tower and count the 8th statue on the left, you'll find yourself standing in front of the statue of St. John of Nepomuk. Touching the plaques on the statue is said to bring good luck, but if you yearn to fulfil your secret wishes, then walk a few steps further and on the same side you will find a black grille with five stars and a relief of the drowning of St. John of Nepomuk. Touch each star and then place your left hand on the cross, on the railing under the grate. Whatever you wish for at that moment is guaranteed to come true. Four statues farther down on the left side of the bridge stands the statue of St. Anne, the patron of pregnant women and intercessor for a happy wedding and marriage.

Vyšehrad, the historical fortress on the cliff, was the seat of kings for the entire 11th century, and is shrouded with history and legends. Even now in the early 21st century, it still retains a magical atmosphere and a touch of mystery. Visitors are attracted by beautiful panoramas of old Prague, the original walls surrounding the entire complex, and quiet park corners. Standing in the middle of the complex is the Church of St. Peter and St. Paul, whose two-towered silhouette is an integral part of the city’s skyline. In the local depository, you'll find the remains of St. Valentine (his shoulder blade placed in a rare reliquary adorned with gold) that Charles IV himself brought to Prague from Italy. In the period around February 14th, the church becomes the site of a Valentine's pilgrimage, including the display of the precious reliquary.

GET AWAY FROM THE CROWDS IN PRAGUE'S GARDENS AND PARKS

Prague's historic gardens and parks are a treasure that the bustling capital can truly boast about. There are over two hundred of them, and their foundations date back to the Middle Ages. Among the best known are Stromovka, Ladronka, and Rieger Parks as well as Letná Park, with its spectacular views of the city from the Hanau Pavilion. Definitely worthy of attention are the Havliček Gardens, an English-style park where you can spend time in Viniční altán, a renovated wine cellar; the Grébovka Pavilion café; play old-fashioned nine pin bowling; or marvel at the charm of the nearby grotto (artificial caves built in Renaissance gardens).

At Old Town Square, you can set off on a fairy-tale ride in a horse-drawn carriage or in a vintage First Republic convertible. If you want to get away from the busy streets, try getting out on the calm surface of the Vltava River. We recommend Prague cruise boats that organize sightseeing cruises with dinner, special Valentine's cruises, or cruises through Prague Venice. And if you like to have your head in the clouds, then think about taking a sightseeing flight. Several companies offer flights above the centre of Prague.

ALL THE TOWERS OF PRAGUE, OR PRAGUE AT YOUR FINGERTIPS

To get a bird’s-eye view of the city, there’s no real need to go for a sightseeing flight, though - just visit any of Prague’s numerous towers. Žižkov Tower (Tower Park Praha), measuring 216m high, is not only the highest tower in Prague, but also the tallest building and observation deck in the Czech Republic. Its interior features a unique 360° view with thematic cabins with interactive elements, a restaurant, a café, a bar, and luxury suites. The Henry Tower (Jindřišská věž) in the Old Town is home to several restaurants, cafés and even a whiskey bar. The very heart of the city, Old Town Square, spreads out before you from the Old Town Hall observation terrace, under which you can also visit the original 13th century Romanesque-Gothic cellars. You can experience charming city views from the slopes of Prague Castle combined with top-class gastronomic experiences at the restaurants Terasa U Zlaté studně and Villa Richter.