The Old Bridge in Mostar over the Neretva River is the UNESCO World Heritage Site. 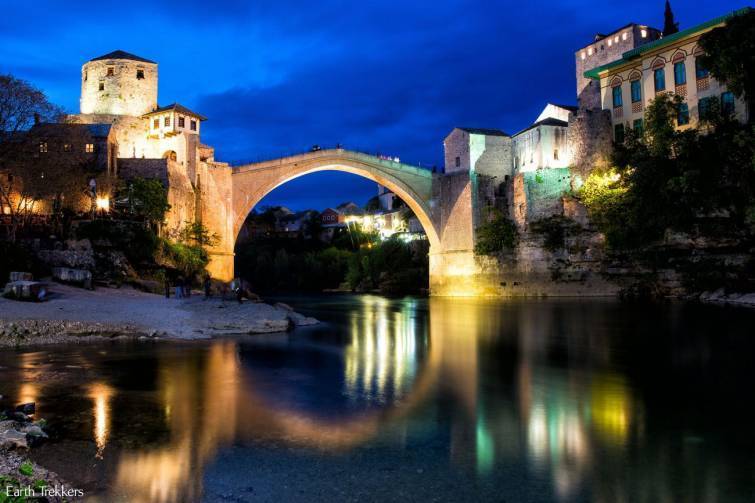 The Old bridge in Mostar over the Neretva River is the UNESCO World Heritage Site which, when it was built, was the largest archway in the world. It was demolished during the War in Bosnia and Herzegovina in 1993 and rebuilt after the war and reopened to the public on July 23, 2004.

The Old bridge has a large arc 4 meters wide and 30 meters long which at its height of 24 meters, at the highest point, dominates the river Neretva. From both ends it ends with a defensive tower, Hellebi in the northeast and Tara in the southwest, which are commonly referred to as the "mostars" (bridge shoppers by which the city was named). The arch is made of a local stone "tenelija", and its shape is the product of many irregularities that arise from the deformation of the intrados (inner line of the arches). It can be described as a ring that is pressed on either side. Instead of the foundation, the bridge moves on the limestone pinnacles that continue at the river level to the towers that bear the towers. The pinnacles are 6.53 meters high (during summer watering), and the arch begins with a decorative dagger 32 cm high, with a bow of 12.02 meters high.

Given that many details of its construction of the mystery, such as the question of how its wooden structure was erected, how the stone was transported to the site, and how the wooden supports have lasted nine years of construction, it can be considered one of the greatest architectural achievements of their time.