Białowieża Forest is home to the largest population of the property’s iconic species, the European bison. 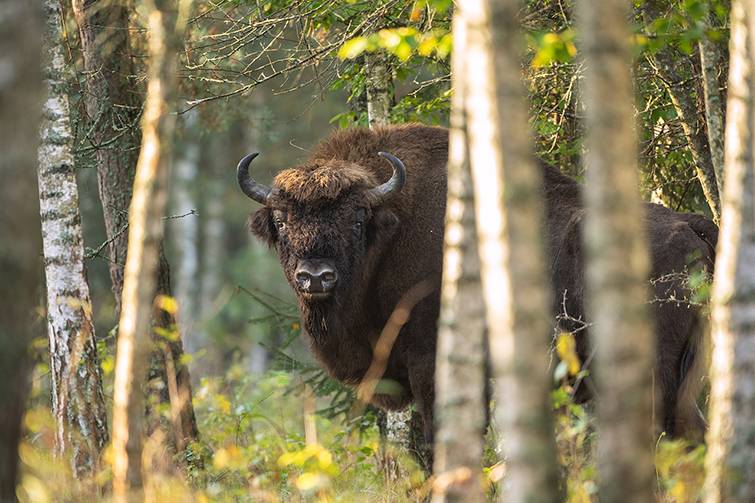 The Białowieża Forest World Heritage site, on the border between Poland and Belarus, is an immense range of primary forest including both conifers and broadleaved trees. Situated on the watershed of the Baltic Sea and the Black Sea, this transboundary property is exceptional for the opportunities it offers for biodiversity conservation.

It is home to the largest population of the property’s iconic species, the European bison.

The species have been saved from extinction here. In the 18th century, the European Bison was almost completely eliminated during hunting trips of the rulers of the time and by poachers.

The extermination started right after World War I, when groups of demobilized and demoralized soldiers were poached in no man's Białowieża Forest. In 1919, the last European Bison was killed. In 1925, the last Caucasian Wisent – slightly smaller than the European Bison from the Polish lowlands - was also killed.

Białowieża brought specimens from zoological gardens; and initially, they were bred just like cows in a separate field. Only several years after the war, in 1952, the first specimens were released into the park. Currently, there are approximately 400 European Bisons in Poland and around 300 specimens in Belarus. There are only 3000 specimens in the whole world, and every single one of them has predecessors from Białowieża.

There’s nothing quite like going bison tracking in the winter. Searching for these majestic animals in the snow-covered wilderness is a very thrilling experience, and there’s no better bison haven in Europe than Białowieża Forest. Designated guides take tourists on wildlife tours all year round. The village of Białowieża lies deep in the forest and has great accommodation for those wishing to stay there overnight.